We've been trying to get Sophia outside as much as possible during the day - it makes all of us Ahouses much happier and sleep better at night.

Sunday turned out to be a really nice day and our adventures took us near the great park in Cambridge (@ Sacramento & Oxford streets). Dave and I thought it would be fun to test out Sophia in the "big girl" swing. She so thoroughly enjoyed her time in the travel swing we had in the house (I can't begin to count the naps that were had thanks to that magical piece of baby equipment in the early months).

In she went, a little confused at first, but soon took quite a liking to it: 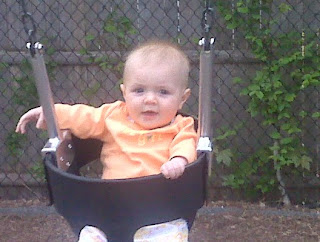 But, after about 5 minutes of swinging, SOMEONE got a little over enthusiastic about the pushing of the swing, resulting in a less than happy baby girl. 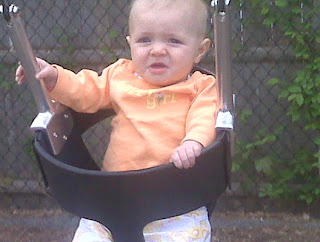 So needless to say, the swinging adventure ended for the day. Happily, upon retry a few days later, Sophia was thrilled to be back in the swing (and even moving along at a steady pace!)

The new adventures are so much fun. Her laughter and giggles are the most rewarding present I could ever receive.
Posted by Mama M at 8:25 AM No comments:

When I was pregnant with Sophia, I was fortunate to get a baby crash-course experience through babysitting. Until I started sitting, my only diaper change experience had been my friend Johanna's son Cameron when he was a month old. I was 22 years old, it was 2 in the morning and completely unaware of the need to cover up little boys so as to avoid being sprayed. (needless to say, her husband Bryan jumped in to save the day).

Fast forward to this summer and I quickly learned the pros and cons of disposables vs cloth and everything in between.

For Dave and I were hoping to minimize the trash/landfill ramifications of disposable diapers. My neighbor uses cloth with the chinese pre-folds, so I got good practice using them, but I was never 100% comfortable I was doing it right.

After reading lots of different sites, blogs and posts on my mom's list (yea! Somerville Moms Yahoo Group) I stumbled onto gDiapers. They're kind of a hybrid between disposable and cloth. They have a cute outer cover, a plastic liner that snaps in and then the diaper insert. If the insert gets dirty, you can dispose of it one of three ways: flush it down the toilet (which requires tearing the sides off - slightly icky but not too bad), throw it in the garbage or compost it (wet ones only).

We started using them right when Sophia got home from the hospital and they've worked great. The inserts are slightly more expensive than a traditional disposable, but in terms of absorption and control, they work great! We have had very few leakage incidents (even during the long overnights) and, Sophia looks really cute to boot. 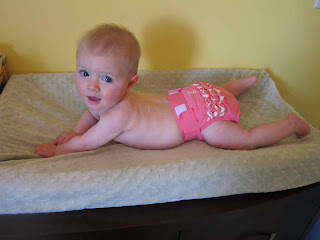 Early on, a friend (thanks Chris!) tipped us off to babies fascination with ceiling fans. Our bedroom fan has enthralled Sophia for many a morning - buying Dave & I a few extra minutes of sleep or soothing her in a somewhat frazzled state.

But because there was no fan in her room, we decided to try the mobile route. Our friend Jane's sister-in-law makes wonderful mobiles (check her Etsy site out at: Almost Sunday). Karen's work is great and her mobiles are so whimsical. She caters to your color choices and adds the touch of personalization we were looking for.

We ordered the butterfly mobile and Sophia loved it the moment we hung it in her room. Here are some pictures: 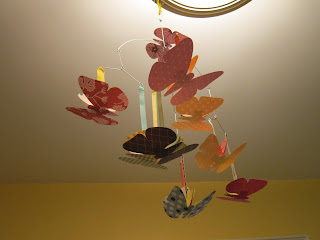 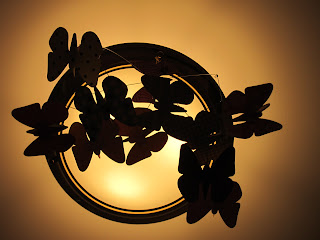 We soon hung it over her crib and I believe it really helps entertain her in the mornings when she wakes up. We've checked in a few mornings just to find her staring up and "talking" to it. There's no doubt, though, it's her favorite thing in the room: 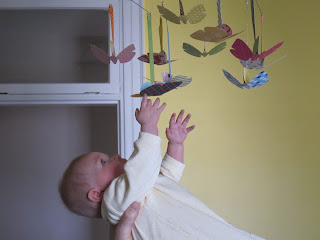 Recently, Sophia has begun expressing an interest in "people" food, which was humorous because for the past month or so, she has been really, really distracted while breast feeding. The slightest noise, light change or glance at her paisley sleeve was enough to entertain her for what felt like eons.

But now it was becoming obvious that she wanted my food. It started with an ice cream cone at Christina's in Inman Square. Sophia lunged from my right arm to my left (the residence of my ice cream cone) with hopes of catching a lick. No such luck.

We had many similar occurrences, from my bagel sandwich on the airplane (I thought maybe it was the crinkly paper?) to my nightly salad (maybe she felt all those radishes I dangled in front of her eyes by their tails needed a good chewing?)

Finally, on Saturday 4/17 it was time to start rice cereal. "They" (whoever the almighty "they" in the baby world are) say that you can/should start your baby on solids anywhere between 4-6 months. Much like everything in the realm of baby, there is controversy about how early is too early, what you should start them on and when you really know. I figured we'd start when we all (Sophia, Dave & I) felt comfortable.

I mixed together a helping according to the box, set her up in her high chair, complete with bib and her own spoon to play with and got to work.


I've also included pictures from subsequent feedings. It's getting much better and I think we're getting more actually in her mouth at each feeding. 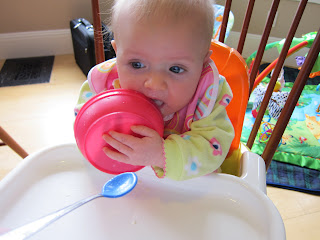 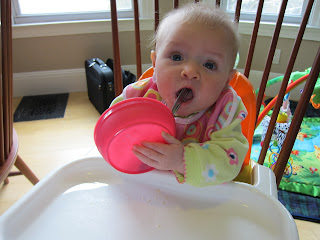 After our little adventure the other evening, I figured it was time to really start the sleep training. I had been debating between using "The Sleep Lady" method and "The Ferber" method. I had both books and read them diligently. I also talked to lots of other moms who each had a case for the method they chose. Because Sophia is inherently a good sleeper and just needed help learning how to soothe herself to sleep, I figured that the Ferber method, which involves letting the baby "cry it out" but checking in and reassuring them at determined intervals, was going to be the way to go.

We had also been swaddling Sophia since the first month and I felt that she needed access to her hands in order to soothe herself (she's a big fan of her hands and fingers these days, as well as her squeaky Giraffe, who we've named Raffi).

So, with Dave at work (late appointments) I commenced the putting her to bed process, purposely keeping her outdoors lots all day and putting her down about 20 minutes later than her normal fall asleep time. (all per the book recommendations). I made sure she had a nice big bottle (she's up to about 6.5 oz before bed) and was snuggled in her new sleep sack, which gives access to her arms and hands, but ads a little bit of warmth.

I kissed her as I put her into the crib and she just looked at me. And started to cry. But because I knew this was the best thing for both of us, I was fine telling her how much I loved her and shut the door.

She cried on and off for about 30 minutes. I went in to check at 3, 5, 7 and 10 minute intervals. Sometime during the 10 minute interval, she was quiet and asleep. It was amazing. It was before 9pm and all was well. I got lots of my little tasks done (laundry, diapers, etc) and knew that the sweet one was sound asleep.

We heard a little stirring from her around 11, but after 2 quick check ins, she was sound asleep till 7am. Dave and I both peaked our heads into her room and she was happily talking to herself in her crib and playing with Raffi. We scooped her up and started the day. It was great.
But we still had to conquer naps...
Posted by Mama M at 10:47 AM No comments:

We have been very lucky with Sophia - she is an extremely happy baby and has been a good sleeper from the beginning.
In the past few weeks, though, she had started to develop this habit of waking up 45 minutes after we put her down for the evening. (It actually started on a night that Dave & I went out to dinner at a friend's house, utilizing the "listening" services of our awesome downstairs neighbors John & Becky. After about an hour of trying to get Sophia to fall back asleep, John called us sheepishly and we returned home. We felt really, really badly!!)

Usually, it wouldn't take much to get Sophia to fall back asleep after this brief wake up. A little rocking, some pinky sucking or nursing and she'd be good to go. And that worked for the first wake up on Monday night. But not the mysterious second wake up at 11:15pm.

I had just settled into bed when I hear Sophia start crying. Screaming, was more like it. We had just started her on rice cereal a few days prior, so I didn't know if she was having tummy issues or what was causing it, as she had never really woken up at this point. I went in and unswaddled her and tried burping her and stretching her legs. She stopped crying but was still very fussy. I tried rocking her, nursing her - I even went back to the old faithful of bouncing her on the ball. She would calm down and just look at me with these big, blue eyes. But she was still pretty fussy. By this point, it's been about 40 minutes. Dave had just gotten home from his soccer game and poked his head in her room (it's always disheartening when you come home to see her door open and hear the white noise machine.) to see how everything was going. He was still kind of in the hallway, so as not to disturb any progress I was possibly making. But because no progress was being made, he came in.

Well, the minute she saw her father, Sophia broke out into the biggest, shit-eating grin (as a side note - why do they call it a "shit-eating grin" - I don't think I'd be grinning if my mouth were full of it!) at the gloriousness of both her mom and dad being around to play with her late night. With that, I promptly kissed her, told her we loved her very much and that she was now going to bed. I placed her in the crib and after a few short minutes of crying, she fell back asleep till the morning.

Dave and I just sat out on the couch for about 30 minutes talking and marveling (without any background noise) about how we had been "had" :) by our almost-6 month old daughter.

The real sleep training, though, would begin the next night. Stay tuned...
Posted by Mama M at 5:55 AM No comments: