The past 7 weeks since having Theo have flown by. Being back to work, I think, makes the time go by even faster. Though I get spend 5 out of 7 days a week with Theo, he still grows and changes so much that it's tough to keep up. I have to say that he is sleeping like a champ. We're still just rolling with day time naps, but (for fear of jinxing it) his nighttime schedule (for now) is he gets nursed to sleep between 8p & 9p and I don't hear from him again until around 4am. Sometimes he goes back down around 5, allowing me an additional hour of sleep. Other times, he'll just kind of hang out and I can at least catch 45 minutes before it's into the shower and ready for work.

Then there is Sophia who constantly seems like a 10 year old in comparison. She is running up a storm and loves telling you exactly what she's thinking - colors, how many things are in front of her (3 kitties, 2 bicycles, etc) and is actually getting really good at telling left and right. I credit Dave for this, which is funny, as often he'll take a left while driving after I've told him to go right! :)

Three big things that happened this week with the kids this week. The first is that Theo started to smile on a regular basis. Here's a shot of my happy little guy: Second, with Theo, is that we moved his bassinet into his room this week. It actually happened on Tuesday (a really hot day). Our room was very sunny and hot, so Lidiana moved him into his room to be cooler. We decided it made sense to just leave him there. And it did. He slept the same as did I and I was still able to hear him. It was a win-win for all.

The other is that Sophia climbed out of her pack and play. When I went in to get her this morning (we're down in Newport) there she was. Standing. By the rocking chair. Now we knew she had been getting too big for it and even at home, had talked about transitioning her to a big girl bed in the next few weeks to free up the crib for Theo. But clearly, as we spend more time in Newport (necessitating the Pack n Play or other travel bed set up) this transition needs to happen. So the big girl bed will get ordered this weekend and we'll tackle the transition over the next week or two. I guarantee that will provide some excellent blog fodder!

Theo will be 2 months old next week. I'll make sure to post after his check up, but I can tell you that both kids are happy, healthy and (most of the time! :) truly a joy to be around.

I made the choice to go back to work 2 weeks after having Theo. I decided this for a number of reasons and so far, all in all, it has worked out. I'm greatly looking forward to my delayed maternity come June & July. While I hate to miss out on these beginning months, I luckily have a job that has afforded me (or I've created) some balance. I work from home Mondays & Fridays, allowing me to be there to nurse Theo, and on Wednesdays he comes with me to work. I'm thankful for those Tuesdays & Thursdays where Lidiana takes care of both kids. There is much comfort in knowing someone who has gotten a full night's sleep and doesn't have baby brain is caring for my child. I can muscle my way through meetings and presentations (no lives are a stake there) but I do miss the naps. :)

One small hurdle I've encountered is creating enough milk supply for Theo. It's been hard to pump and keep up with the supply & demand, but I think I'm making some headway. I actually don't mind the pumping that much and my goal is to not let my head get the best of me. The more stressed I get about not producing enough, the more my supply goes down. I've also come to grips that if I'm not producing enough one week or another, than the occasional supplement of formula isn't going to hurt anyone. And in fact, it'll help.

It amazes me the stigma placed on formula in certain social circles. With Sophia, I completely abhorred the idea of supplementing. It was like you had suggested I feed her razor blades. This is extremely humorous in retrospect, being that I was a completely formula fed baby and I turned out just fine. I was rarely sick, I knew my mother loved me and I didn't grow any additional appendages. My best friend supplemented her daughter because of low supply (and god knows she tried each and everything to increase it under the sun!) and clearly I respect her, her parenting choices and her daughter turned out just fine.

My hope is that I can give Theo as much of my milk as humanly possible. I enjoy it for so many reasons - bonding, health, all the good antibodies that he gets as a result. But stressing over it isn't going to be healthy for either of us. I have my pumping schedule (don't mind if you see me in the car on the way to work, draped & taking advantage of the 40 minute commute). Sophia has also joined in the encouragement during the morning session as she shouts "Mama's Pumping!" (From what I've heard, most kids imitate their moms breastfeeding...well, we're almost there :) )

I'm drinking my tea and eating my oatmeal. The rest is up to my body. In the end I know it'll all work out for what is best for Theo, for me and for us as a family.

We had Theo's 1 month appointment this past week and I'm happy to report he is growing long and strong. He gained 2 pounds since his first weight check a few days after birth. This was amazingly comforting as with Sophia, it took her about a month to get back up to birth weight, mostly because we were both falling asleep while eating at night and the whole breastfeeding thing was just foreign. Once we got it figured out, she definitely gained weight.
I think the other contributing factor to Theo's weight gain is the 2 days of bottle feeding he gets while I'm at work. He's getting 3-3.5oz bottles while I'm gone, so he is clearly consuming a set amount of goodness.

He is sleeping like a champ as well. We've settled into a decent routine too - he's down between 8:30 & 9pm (after an hour-plus feeding prior). He settles himself down fairly easily, but I think the key this time around is that we let him settle himself - just out of necessity. Trying to juggle getting both kids down to sleep somewhat simultaneously lends itself to that I suppose. 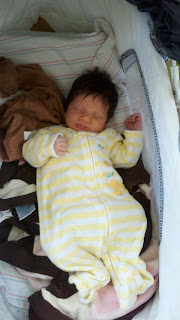 It doesn't help that Sophia is in a "Stay up and talk" mode lately - sometimes for close to an hour after we leave her. Hoping this one rectifies itself soon...In the meantime, she's been a trooper while traveling through nap and catching some zz's where she can... 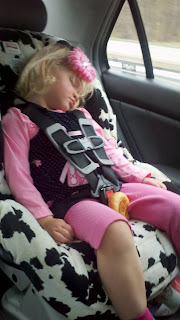 He's been the perfect companion at work - I've got a lovely set up where he comes in with me on Wednesdays. I have a swing and changing pad set up in my office and have scheduled my meetings accordingly. He has cooperated (if you will) with the schedule and takes good naps and eats well. Everyone enjoys seeing him - it really lightens the mood. I most enjoy being able to spend the day with him. I will often just wear him in the Bjorn and snuggle with him while I work. It really brings down the street level. Sophia gets a kick out of the two of us leaving in the morning - "Baby Theo going to work!"

Here's shot of my work buddy! 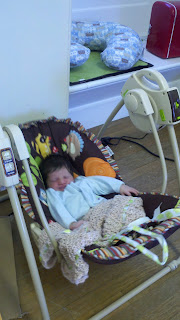 Neck control is really strong and he is still rocking the hair - it is definitely his signature trait. In fact, after his bath when it is freshly cleaned, it has some serious wave/curl to it. It's so soft and luxiorous. Yep, my son has McDreamy hair. He's also started to smile - this cute, lopsided grin, which makes everything just so much fun and a bit more rewarding - no matter how tired I am.

We're off to an Easter egg hunt tomorrow - pictures to follow!
Posted by Mama M at 5:30 AM No comments: