More for posterity's sake - a video of Sophia singing Jingle Bells. Note - this is well after Christmas, but she just loves the song (she learned it this season) and will randomly start singing it.
Enjoy!

Thinking we were getting off easy with Sophia's quick bout of norovirus, we clearly jinxed ourselves. As you've probably read, the flu season has been out of control here in Boston and the Ahouse house fell victim...

It all started with me - a bad cold or something, but I was knocked on my butt, but, as a mother, I had my obligatory 18 hours of rest/recovery on the weekend before resuming normal duties...As a side note, I found this hysterical blog depicting life as a sick mom in a family of sickies...

Tuesday night, Dave came home from work feeling less than stellar. Honestly, the sound of a grown man puking is about the worst thing I've ever heard. I'm often shocked that he doesn't wake up our entire building with the sound. But I digress...around 4am, I hear Theo crying, which he never does unless there is physical pain involved. Upon checking in, the poor little guy was a hot water bottle - 103 fever. After taking his helmet off and feeding/snuggling for awhile, he fell back asleep.


Luckily, Sophia was untouched and I happily sent her over to our nanny share buddies for the day to avoid too many germs. Poor Theo and Dave were miserable on the couch all day and I was just working to disinfect everything.

On Thursday, I took Theo in for a flu test and he tested positive. I brought Sophia up for a test as well (I told her she was going to have a really cool nose-picking experience!) and she was negative. Both she and I got our shots - better late than never, I guess. Theo was prescribed Tamiflu suspension, which, we quickly learned, was in high demand all over the city.
Finally, at 7:30 that night, after calling about 10 different pharmacies, the Target in Watertown had it. So, with Dave still down for the count, I trucked the kids out there to pick it up. Poor Theo puked up his first batch- I can't blame him. The frothiness and smell were enough to do a healthy person in. 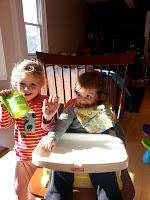 But sadly, whether from the germs in the house or after effects of the shot, Sophia turned into a hot mess. No fever, just a cold beyond everything. Which led to about a week of not sleeping for anyone (up every hour to have nose blown or need a snuggle or to move the blankets just so...sigh...)
So we're now recovering and hoping to shake this soon. Germs germs go away, don't come back for another day!
Posted by Mama M at 6:33 PM No comments:

It's been awhile since I've blogged - since last year!
It was amazing to have a full two weeks off with the kids. I'll admit, I was nervous about being a full-time SAHM for that time. There are definitely days when work is a sanctuary. But we all survived and filled our time up with good playdates and visits with friends.

Unfortunately, we did get hit with the norovirus (aka the puking bug). While Sophia is the only one who had it, we all got to take part in it. I don't actually wish it on my worst enemy.

Luckily it was fairly quick moving and she recovered in time for our annual New Year's Day pilgrimage to see the flag raising on Prospect Hill. Here are the munchkins bundled up for the event! 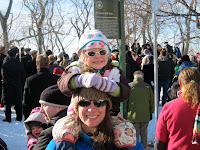 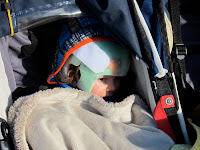 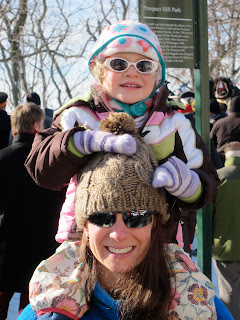 Real life resumed the next day with work and school in full swing. Little did we know that more germs were to follow....
Posted by Mama M at 6:08 PM No comments:

Because I was home for almost the entire 1st year with Sophia, any pumping I did was purely for convenience - a bottle before bed or when I when out. I was diligent about pumping in order to keep up my supply, but I knew that I could always just feed her if I needed to and there wouldn't be an issue.

With Theo, it was different from the get-go. I was back at work 2 weeks after having him, so pumping started very very early. I was convinced I had a low supply, so I started in on Fenugreek and eating lots of oatmeal. I soon realized that it helped a lot, but that I was also producing what I needed too as he was still so young and not taking a ton at one time.

Even through my delayed maternity, I still kept up a rigorous pumping schedule so I could stockpile milk in the basement deep freezer. There is something gratifying about seeing the ounces accumulating (and equally demoralizing when they don't.) Luckily, I was able to make some good headway and accumulate quite a few ounces so that when I went back to work it wouldn't be session to session coverage.

I had always planned to breastfeed through a year, as I did with Sophia. But I wasn't sure with the almost full-time pumping if I'd be able to make it. I also knew that I would introduce cow's milk at some point in his 11th month (as I was clear there was no dairy allergy - this child lives on yogurt & cheese and anything else you'll give him). The introduction of cow's milk a little early would also give me some wiggle room on the pumping. I was currently pumping 4-5x/day to cover his feedings. (2 of those pumps were at work, 1 was before work and 2 were dinner/before bedtime.)

I was amazed, gratified, and frankly, really damn proud of myself. After some quick calculations, I realized I could begin dropping to 3 pumps/day (ahh - the time this frees up is amazing - trying to facilitate breakfast for both kids while pumping concurrently...it's a sight no one needs to see.)

The pressure is off and I can slowly whittle down my stash and know that little man is covered with mama's goodness. I'll happily keep breastfeeding him past 1 (our morning time together is so precious to me) but I am thrilled to have the end in site with the pump.
Posted by Mama M at 5:56 PM No comments: