How a Halloween Costume came to be

Growing up, my mother always made me the best, most elaborate costumes. One year, I was a computer, complete with printer (and this was a desktop - none of this small, laptop stuff). Another year was a grandfather clock. One of my personal favorites was the Red M&M year (complete with red face paint and red shower cap). Mind you - all of these costumes were hand hand made by my mom. (I'll see if I can scan in some pictures of them - they were classic!)
Well, I inherited her creativity, but unfortunately, I'm a little lacking in the execution skills.

Being Sophia's first Halloween, I wanted it to be a fun experience and entertaining for all of us. After all, her first birthday is next Sunday, so I had visions of a cute, cuddly little outfit from Carter's. (I mean really, what baby isn't adorable in one of those little froggy or duck outfits. And warm to boot!)

Oh no. Not in our house. Unbeknownst (or blocked out) to me, my husband has a deep seeded belief that Halloween costumes are to be scary. Not cute, not fluffy, but scary. Even almost 1-year olds. We compromised on Sophia being a witch. Somewhat scary, somewhat cute. (I drew the line at any face paint!) The only problem - the commercialized side of Halloween doesn't provide any infant witch costumes. So I had to make one.

Now, this decision was made in September. You would think that would give me adequate time to get my stuff together. Nope. Thought about it for about 3 weeks and purchased the fabric two weeks ago. Measured Sophia last week (the plan was to just cut a hole in the top for her head and create something "poncho" style for her. (Thank god for my friend Morgan who spied a witch's hat at Target a few weeks ago and bought it for Sophia).

Cut to yesterday, the day before Halloween. I cut the hole (albeit a bit off center) and popped it on her. It was great - if she was about 2 feet taller. So I started to trim it while she was standing at her Zany Zoo. Then I safety pinned her sleeves (well, the fabric, thus creating sleeves) Then I trimmed some more. The final product is below: (I think the broom is my proudest accomplishment of the whole costume!) 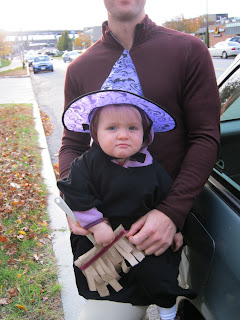 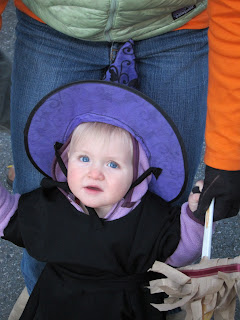 Email ThisBlogThis!Share to TwitterShare to FacebookShare to Pinterest
Labels: halloween

Where did the time go?

As we are rapidly approaching Sophia's first birthday, I realized the other day that she is becoming a real little person, right before my eyes.

It's sometimes difficult to notice the changes when we're together day after day for all her waking hours. But something struck me this week - she is becoming more and more independent. Clearly, she still needs me for most all of the important stuff, but her desire to do it on her own is growing greater by the day.

From food, to moving around, even to playing, it's definitely on her terms. She is fabulously content to play in her room in the morning after eating amongst her books and toys. When she hears us in the kitchen being productive (usually, we're unloading the dishwasher and she has a very current love affair with the door!) she'll crawl on out and down the hall.

The crawling happens full force when she is motivated, but she loves to walk while holding your hands/fingers now. She even has begun to balance on her own for a good 5 or so seconds before plopping onto her cute tush!

On the food front, she had her first introduction to cow's milk. I introduced it earlier this week in a sippy cup at lunch & dinner. Just a few ounces to get her warmed up for the transition. We're working on the mechanics of drinking, as she hasn't quite figured out how to tip the sippy cup all the way back to get the milk into her mouth. But I'm sure it'll happen soon.

I am constantly amazed by her growth and development. I'm sure there are kids her age who are doing so much more, and others doing so much less. As far as I'm concerned, she's doing exactly what she needs to on her own time frame. And I couldn't be prouder.
Posted by Mama M at 11:41 AM No comments:

Mommy Musings - the Half Marathon

Running was a big part of my life before I had Sophia. While I was pregnant, I ran (or some form of it) until I was about 7 months and it just hurt too much (For the uninitiated, relaxing is released in your body so all your joints and ligaments stretch to accommodate the birth of the baby. This makes for a very unhappy pubic bone and hips while you're trying to run. But it's great for yoga!)

I started running right around 8 weeks after Sophia was born. I felt ok, but didn't really comprehend how much fitness I had lost and how tired I really was until I ran my normal 3.5 mile loop and was completely sucking wind. As always, it humbled and motivated me simultaneously.

I knew that I needed a goal to get me running consistently again. I wanted to complete a distance race before Sophia turned one. During the springtime, my former roommate suggested we run The Applefest half marathon in the fall. She had run it twice before and the timing was perfect, end of September. That gave me all summer to work up my mileage and figure out training with a baby (sleep - naps for all were my savior. Milk production - yup, definitely affected by running - and boob chafe. Thank god for glide and cw-x bras). The added fun was that Dave was going to train and run it as well.

Sophia & I did lots of training runs together - many with our friend Alison & her son Will. Running with a stroller was a shift - I had someone else to worry about on my run, where in the past, runs were all about me. Was she warm? Happy? Sleepy? It also changed my stride - much more of a "treadmill stride" with a shorter, clipped pace. Running with Alison, though, made it great. We were able to motivate each other and also share our roles of running mommies, scooting forward to make faces at the other's baby.

On weekends, I was able to get out for my long runs alone. Dave would run Saturdays and I would run Sundays. Without fail, Sunday turned out to be the crappier day to run, whether Sophia decided to teeth or fuss on Saturday night or it was torrential rain out. Either way, it provided me with a great challenge and only made my training more motivating.

Finally, race day came. Everything was lined up for success. My neighbors and mother-in-law were taking care of Sophia. We had our bag packed and the route mapped. The only problem: it was hot. Really hot. At the end of September, in New Hampshire, you expect cool. Fall. 50s, maybe 60 degrees. Nope - 85 degrees at 10am and humid. Oh, and some freshly paved blacktop and a course with hills that had some percentage grades similar to Mt. Washington in parts. But I was ready.

My goal was to finish under 2 hours, and mentally was prepared to not meet it because of the weather. I don't enjoy the heat, and, having run a 1/2 in Virginia Beach in the past, had not had particular success. In the end, though, all the training through lack of sleep, rain and Newport heat did me well. I passed Dave around mile 11 and just kept trucking. I finished just under 2 hours and felt good. I finished a half marathon and Sophia was just shy of 11 months. Hooray!

While I'm not the speedy runner I used to be, I like to think I'm a new, hybrid runner. A little slower, but mentally tougher. And definitely enjoying the scenery.

And Sophia's first race (well, second, because she did the Feaster Five last year at 2 weeks old) will be Paddy's Road Race, being pushed by dad, next Sunday.
Posted by Mama M at 7:37 AM No comments:

11th Months on the Outside

Sophia hit the 11 month mark this past week - funny that we mark every month of life early on, then, as we get older, years and then decades. 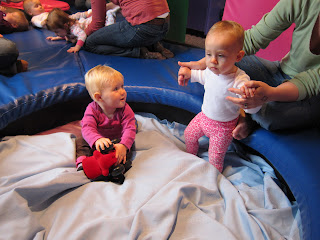 But when growth happens as quickly as it does in these early months, there is lots to celebrate.

The little miss has been playing the role of "Dora the Explorer" lately. She's investigating every space around the condo and pulling herself to standing on anything she can find. She recently discovered we had a porch, but hasn't quite figured out the hurdle to get out on it. She has mastered the stairs and is making big leaps (no pun intended) in propelling herself forward while we're holding her hands (a.k.a walking).


She is also very aware of personal space now. 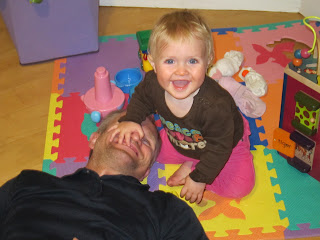 If someone horns in on something she is doing (adult or small child) she'll make it known that they are invading on her. But at other times, she will happily play and interact with other babies. It is really cool to watch.

Her friend Frances came over the other day to play. Frances is an excellent crawler and loves to be chased. Sophia enjoys crawling, but can't be bothered unless there is something to go after. So needless to say, the girls went all over the condo with Frances leading, checking back for Sophia as she "tony pena'd" her way chasing Frances. Good times were had by all.

She's eating new foods every day - some she likes a lot, others, she humors me by trying a little and then making it obvious she is done. We're still at 5 teeth, though it's been a month since our last one, so I feel like we're due for another one (or 3) soon.

Finally, Sophia has also taken an additional characteristic to her now infamous "lion roar" - the attack and pounce.
Here she is prowling and attacking her prey: (the humble giraffe didn't stand a chance). :) 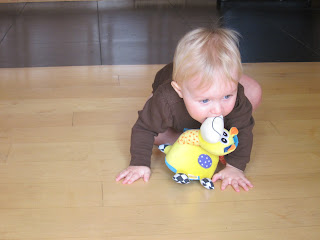 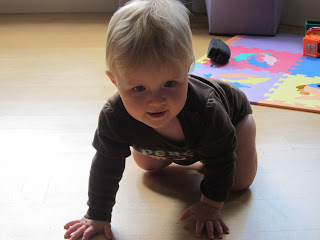 Fall is in the Air

I haven't blogged in a bit because we have been embracing Fall and all it's weather full force.

Our days have been filled with lots of outdoor time - riding along in the stroller for a run to the park, going to the Farmer's Markets for fresh veggies or riding in the Burley trailer around town.

I'm definitely loving the trailer, and it seems like Sophia is too. It makes life much easier than trying to drive and find parking everywhere around town. And, we can stowe a bunch of stuff in there.Somerville just put in great new bike lanes down Somerville Ave, a huge plus on the safety front. 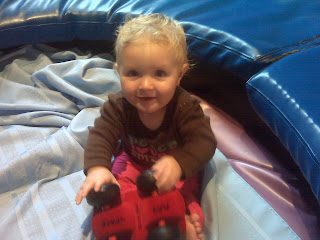 We've had a few cruddy weather days, but luckily we're members of the Children's Museum
so we can sneak in there for an hour of crawling time in the toddler room. It's great, because there is a specific area sectioned off for crawlers - full of pads, mirrors and this cool waterbed thing. (And no, the waterbed didn't burst, her hair looks like that as a result of the rainstorm we got caught in while walking to the museum!)

In terms of indoor time, we broke down and got a Zany Zoo - Sophia was totally digging her friend Charlie's ZZ, 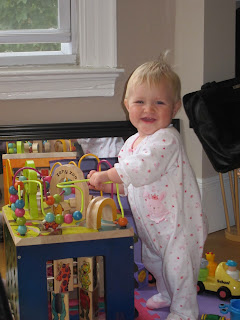 and it's perfect for pulling up/standing at and lots of fun open and closing options. Here she is in action:


Thanks to our friend Lee & her son Andrew, we acquired a tunnel. Sophia really enjoyed it! 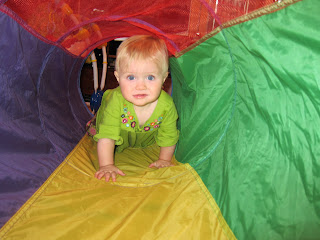 Finally - a quick video clip from this morning - Sophia is exploring all over the condo and getting quite adept at the "Tony Pena" crawl - right leg out straightish for pushing off while the other leg is bent.