We're not particularly religious, but there is something festive about Easter and the celebration of Spring. I think I mostly like it for the cute outfits for both Sophia & Theo.

Sophia developed a concept of the festivities last year and it's kept growing. She loves the concept of hunting eggs and even got to pick out hers (and Theo's) baskets this year. We may or may not have reminded her that the EB talks to Santa and so it was really important for her to be good!

We started off with some Egg coloring
(Sophia took the lead. Theo cheered her on...) 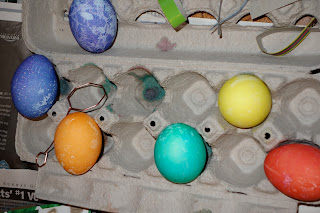 We went for brunch & an egg hunt in Newport. Last year, if you'll remember, Sophia was quite taken with the Easter bunny. This year, she talked about him for a solid 2 weeks beforehand. Sophia really enjoyed actually participating in the egg hunt this year. It's a funny thing - a holiday all about candy and then the general annoyance by parents that the kids are eating a ton of candy. Sophia definitely enjoyed snacking out on some hollow chocolate bunnies and jelly beans, but mysteriously, her Reese's chocolate peanut butter Easter egg disappeared! :)

Here are some fun shots of the day: 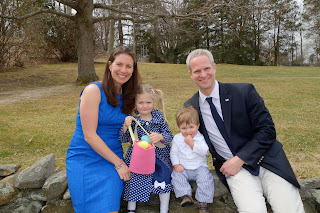 Theo was born with an amazing head of hair. It was actually quite shocking when he first came out - a whole head of dark, curly hair.

Fast forward over the year, through the helmet and the hair kind of took on a life of it's own. The curl got squished out a bit from the helmet (at least in my mind) and quickly went from adorable baby with lots of hair to "Wow, what a cute little girl!!" remarks at the grocery store. (It probably didn't help he was often wearing Sophia's purple/lavender coat). 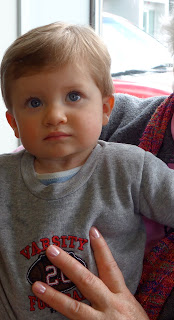 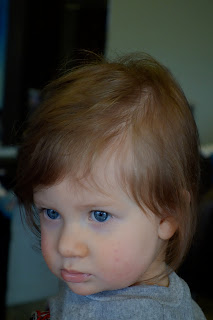 Here are a few action shots of the experience. I didn't actually cry. But it was far more emotional than I thought. I saved a few locks of hair and actually got them into the baby book.

Here's a quick video of the little man in swim class with Dad!
Posted by Mama M at 6:04 PM No comments:

Email ThisBlogThis!Share to TwitterShare to FacebookShare to Pinterest
Labels: swimming

A little about Sophia... 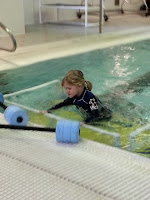 I have been making a very conscious effort to make sure Theo's accomplishments don't get lost as the second child, and I seem to be keeping my head above water on that. At his age, the growth and development happens so rapidly that I can take for granted the developments happening with Sophia. 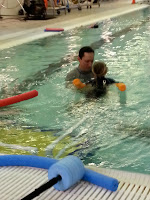 Her big thing is swimming - we enrolled her in swim classes and we're on the second semester at MIT. She absolutely loves them - she's in the water with three other kids and the instructor takes 2 of them out at a time (the remaining stand on the 'tot dock') with noodles, floating barbells, etc. and work on all sorts of skills. She is completely in her element and also starting to make friends. She remembers the other kids' names and really is starting to interact more with them. It's great to watch.


The other exciting news is that she got accepted (or, I guess we did) to Agassiz preschool for the Fall. I say we because when I was asking about the admissions criteria, the director told me it wasn't about the child - they just had to interact well with peers and be age-appropriate. It was about what the parents and family as a whole could bring to the community. As a co-op, we are all expected to be on a committee and also volunteer time in the classroom. Dave & I fell in love with the place - it's a very art/creative learning place - something we both admit are not our strong points but believe is great for our kids. Sophia had a blast on her visit - especially because she got to a) feed the fish b) they gave her cupcakes & cheerios and c) they had new (to her) cool toys. What's not to like?

Overall, Sophia is growing and developing so much. She still zips around on her balance bike - the best is every Tuesday/Thursday, she rides it to school. She's on the sidewalk and I ride my bike on the road next to her. She's getting to be quicker and more balanced every time! Her vocabulary is pretty impressive- her focus is on having us spell everything for her. She is constantly taking in new words and often parroting (for better or worse - gulp!) what she hears.

She also goes from being the world's best big sister to, well, a big sister. She has started taken on a protective instinct when something (other than her) makes Theo cry. When it is her, Theo has at least started to defend himself a little. As for she and I, we have some quality time together each weekend and also at night after Theo goes to sleep.
And that's my big, almost 3.5 year old in a nutshell!