I'm sitting here the night before "Nugget" as we have affectionately been referring to him, is due to be born. Not sure if he's actually going to show up tomorrow, but hopefully this weekend at least!

It's been a very quick as well as a very long 9 months.
Being pregnant the second time around is far different than the first time. Some major differences:
1) Didn't really start paying attention until month 5. For a number of reasons - it was summer, life was busy, Sophia is running around and I wasn't really showing much.
2) We didn't tell people until around then either. Again, for a number of reasons, but it worked the best for us. We were (and are) very excited, but life chugs along. And when you only have 4 months to go, it happens much quicker than the whole 9 months!
3) I am working full-time and caring for Sophia. When I was pregnant with Sophia, I had just been laid out, so life consisted of working as a babysitter and dog walker. I definitely put in my fair share of hours, but that also included nap times when the kids were napping or being outside a ton. And, I could come home and just veg at night. Or take yoga. Totally different this time around. Good general energy, but the desire and time available to focus on me was far less. Dave was excellent about making sure I got out and about during the week, especially once I stopped running (around December) so that I didn't lose touch with friends/life after the sun goes down! :)

Some funny things about this pregnancy - I'm carrying differently and likely smaller than I was with Sophia. The smaller point is something of note, as everyone (from the pregnant lady next to me in yoga to the cashier's at Dunkin' Donuts) feels the need to comment that I'm not gaining enough weight clearly and/or tell me that I can't be XX weeks/months pregnant. To which I reply, "No, I really am. Trust me." In reality, I'd rather kindly smile and reply back "Funny, because you look morbidly obese. Maybe you're gaining too much weight?" Not appropriate, I know, but neither is their commentary. I wouldn't ever have the guts to say it, but it makes me smile in my head.

People also seem to ask a lot if Dave is really excited to have a son. He is, I'm sure, but really, he's just excited to have a baby and be a Dad to two. Maybe after the little guy comes out, there will be some "father/son" bonding thing that is gender based, but for now, he's just psyched to be a dad x2. He is so head over heels for Sophia (Definitely daddy's little girl) and has a blast roughousing with her that I don't actually expect it to be much different when little man comes.

Sophia seems really excited to be a Big Sister. You ask her who's going to be a big sister and she proudly replies, "Sophia!" I'm not sure knows what this means exactly, but I think somewhere inside, she gets it. Our top books for her have been: Julius the Baby of the World, Hello Baby, and I'm a Big Sister. All of them have totally different flavors to them, but she really enjoys them and I think they have (will) help the transition along. Either way, I'm betting she asks to return him at least twice.

Well, hopefully this is the last post as a family of three. Look for updates in the near future on the family of four.
Posted by Mama M at 5:49 PM No comments:

Sophia singing in the bath

I shot this video (sorry for the poor quality - phone camcorder) of Sophia singing in the tub.
We have Wheels on the Bus and Itsy Bitsy Spider. You may need to turn up the sound.

What are you up to these days?

It's been quite awhile since I've blogged - with "Nugget's" impending arrival (due date is tomorrow...we'll see when he shows) we've been trying to get as much one-on-one time with Sophia as possible.
A quick report of what she is up to -
Her favorite books are constantly evolving. Recently some of her tops include:
It's kind of fun to moving on to new, longer books. While the Sandra Boyton collection will always be near and dear, the longer form stories are fun.

One of my favorite things that has happened was actually her repetition of a phrase she picked up from "A Bedtime for Bear." We were having a conversation and Sophia interjects with "How Interesting..." in almost the right context. I about burst out laughing, because really, there is nothing funnier than having your two year old comment "how interesting" on something you were saying! (It's also a line from the book from the mouse to the bear...) 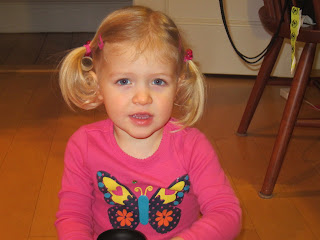 That's about all of it on the growth and development charts. She's definitely getting to be a big girl now before our very eyes!
Posted by Mama M at 5:30 PM No comments: