The Beauty of "The Nap" 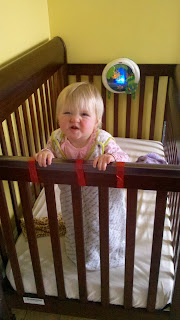 I've mentioned in earlier posts that Sophia is transitioning to one nap. While my initial reaction was to fight this transition as long as I could (admittedly for entirely selfish reasons - I liked having 2 bouts of quiet time throughout the day!) I am happy to admit this one nap thing has brought me over to it's side.

While we're not on quite a consistent schedule (the nose boogers from hell have been haunting us for over 2 weeks now and occasionally wake Sophia mid-way through when she is "supposed" to be sleeping till) we have gotten into more of a rhythm of her going down to sleep after lunch (anytime between 12:30 and 1:00pm) and sleeping for upwards of 2.5 hours. It is a very respectable nap.

But the best part - this is it in the land of "changing naps." From what I understand (or am deluding myself into thinking) this one nap thing hangs out until there are no more naps to be had (god help us all!) If I trace back the steps over the past 14 months, we went from newborn stage (sleeping whenever and forever how long she wanted with absolutely no predictability) to what I like to call the "freshie" stage - not quite newborn but still not on a schedule - where she would need to sleep every 1.5-2 hours - Kind of a productivity killer for outside the house.

Then, it was the 3 nap phase - a morning one, then 2 hours later and then a third nap - for us, this one was usually in the stroller and the one I like to credit for most of my post-partum weight loss.
Around 6/7 months, there was 2 naps. A nice long morning nap and another one in the afternoon (if we were lucky, both of these naps were 1.5 hours.) But the morning nap meant we didn't leave the house until 11am at the earliest. (Kind of made me feel like a college student all over again.)

So, little Ms. 1 nap - I'm excited to have you hang out for some time, a few years even. But if you felt like edging closer to 3 hours, that would be cool. But I'm just happy to have you here!
Posted by Mama M at 4:47 PM No comments:

Sophia has definitely been on the move lately. Ever since her first steps at Christmas, she has decided that walking is the way to go. It's a whole new world.

Generally, she'll try to find the biggest thing in the room to carry with her while walking: 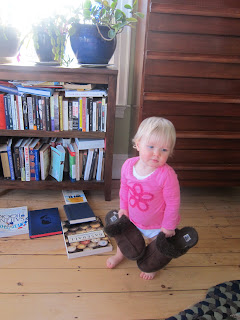 For those of you not on Facebook, here is a video of our little one walking all over. It's funny, she's a very quiet walker, so she'll sneak up on you and you won't know she's there till you turn around!

Every January 1st, Dave & I head up to Prospect Hill in Somerville, for the annual flag raising ceremony. It is said by some that George Washington first raised an early version of the U.S flag called the Grand Union Flag, on Prospect Hill, on January 1, 1776.

Each year, the city raises a new flag and has a big celebration, including George himself. Here's Sophia checking out George & his horse. 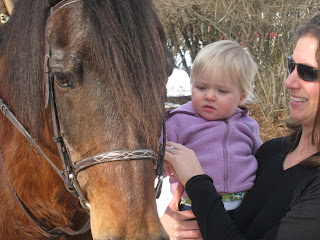 She wasn't quite sure what to make of him, so we moved on.

There was a really, *detailed historian* (read - not exciting for kids or most adults) speaking, so we had to play in the street to make it until the flag was raised. Dad got some good shots of Sophia & I in action: 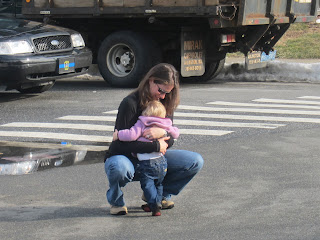 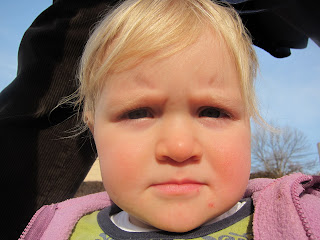 And of course, every good day involves a ride on Dad's shoulders (much to the delight of Sophia & the women in the background) 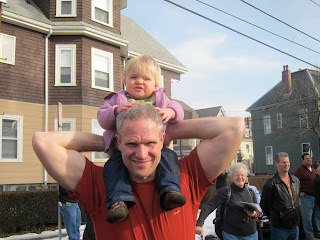 Finally, after well over an hour of talking, the flag was raised. Pretty impressive: 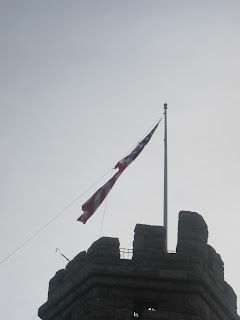 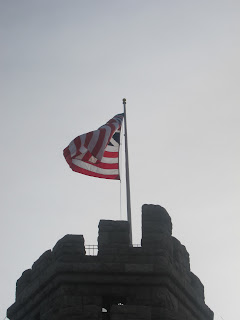 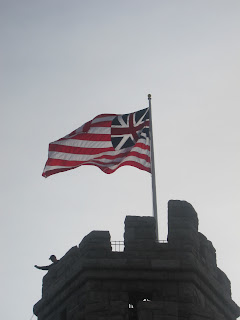