I'm averaging about one post a month of real topic. I actually bought Theo a baby book at the end of the summer and am making an attempt to fill in the really important stuff, but I still find logging most everything here works even better.

Summer has ended which results in us being around Somerville a bit more than usual, though we seem to always be on the move. As Theo is still napping 2x each day (one morning, for about 90 minutes and one afternoon for 2-3 hours) coupled with Sophia's afternoon nap, we have limited get out time on the weekends. Often, we'll divide and conquer between Dave & I with one taking one child out while the other is home cleaning/napping. And I am much more relaxed about Theo missing a morning nap or catching it in the car then I was with Sophia. Ahh, the second child.

Theo is growing leaps and bounds. He is loving his solid foods, eating a whole variety of things. I've also thrown in the towel on making all his food for him. I just don't have the time and frankly, he is getting far better variety with the yummy Happy baby pouches I'm getting. I can't wait for the "Gobble Gobble" pouch at Thanksgiving!


His new acquisition this month was a helmet to help reshape his flat head. Being such a great sleeper, he managed to squish the back of his head flat. So, for the next 4-6 months, he'll be done a dapper, green, animal looking helmet! 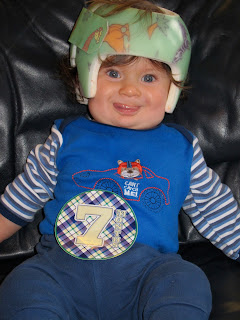 I have to say, the transition has been fairly painless. He accommodated to it in no time. Occasionally, I'll hear him play with the velcro on the side at night, but it hasn't affected any of his sleep or growth. And it merely directs his growing head painlessly, rather than the concept of orthodontics (which is all I could relate to) by moving bones already in place.
We have a great therapist who we see for checkups every 10 days or so. She's confident he'll do great and go from 102% (where he started - think shaped like a football, longer side to side) to around 92% (meaning front to back is longer than side to side.) As of our 1 month check-in, he was at 99%.

Other excitement - he sits up on his like a champ now. The helmet is great for those occasional times he topples over, though the sound might be a bit more disturbing... 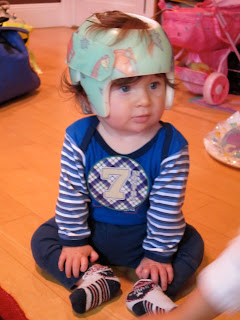 He is also quite comfy standing while holding on to his Zany Zoo and even let his hands go this week briefly. He definitely is not pulling up yet.

On the crawling front, he is motoring around doing 360's and backing himself into corners. He's definitely working on putting it all together to go forward. It's really great to watch. I'm not sure if Sophia will know what hit her when it does happen! For now, she's happy to help him with Tummy time (whether he wants it or not :) 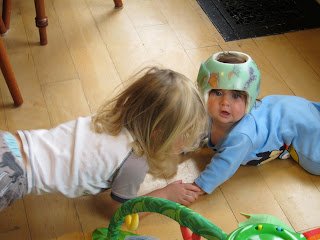 For now, the two of them are good buddies, with him laughing at her shenanigans. I'm so screwed when they're teenagers! 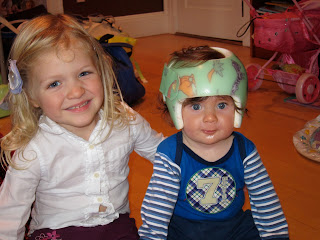 Sleep is still good - he goes down like a champ around 7:15p and sleeps (generally) till at least 5:30a. The days he sleeps till 6a are godsends and 6:30a is a dream that happens every week-10days. I really have no complaints though. My little man is getting so big!

I'm not the artsy crafty type. I want to be, I have great ideas, but bringing them to fruition is another thing. Sophia, like most toddlers absolutely adores paints and crayons and anything colorful and messy. Our nanny Lidiana is amazing with what the two of them come up with and I am forever thankful (in so many ways!) for her.

But a tradition in my house was always painting pumpkins (I was too chicken of the goo and seeds inside to carve mine). I was inspired the other day to pick up some mini pumpkins so Sophia & I could have a painting party one night after dinner. It was a blast. Check out the shots below:

The artist pondering her options: 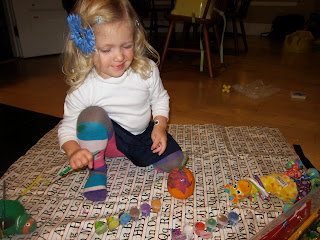 Hmm, I wonder how this tastes?? 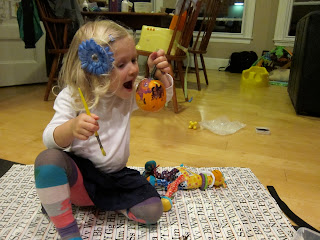 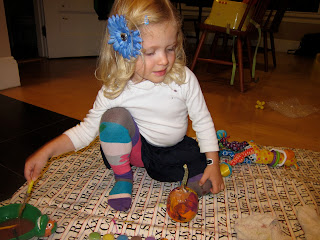 I had only been to Martha's Vineyard once as a kid and Dave goes yearly for a sailing race. Having heard such great things about it, but not wanting to deal with summer crowd, we figured a September Sunday would be the perfect time to bring the kids & bikes and adventure around the island.

Despite an early morning of almost missing the ferry out of Woods Hole (happily, there was one 10 minutes after the one we meant to be on!) we were off.

Sophia hanging out on the rails: 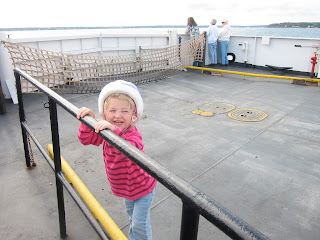 Theo getting a snuggle from Dad: 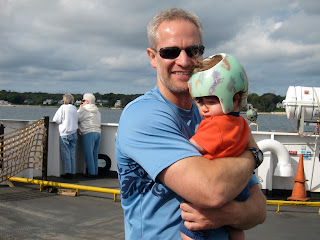 Sophia is ready to go on the back of my bike: 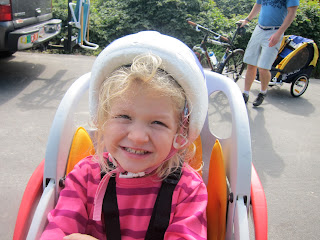 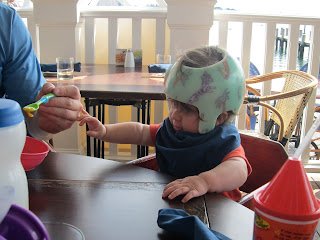 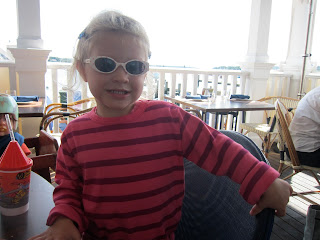 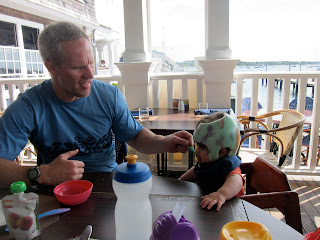 Theo was a little taxed, so naptime on a bench at the Edgartown Yacht Club: (anything less would be uncivilized!) 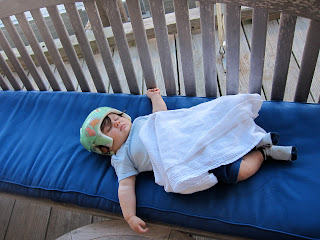 My favorite - daddy/daughter time looking out at Chappy: 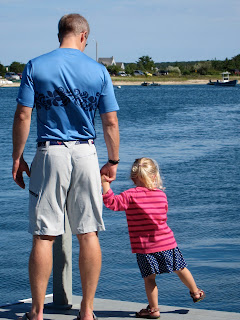 Now it was time for Sophia to nap. She generally narrates non-stop on the back of my bike. When we were heading back to OB from Edgardtown, I realized it had gotten quiet. She conked out and, very unlike her normal M.O. stayed asleep long after we stopped moving. 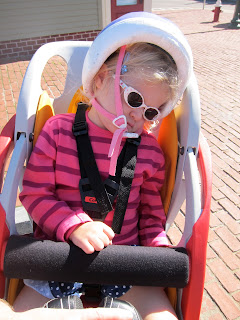 So, we took a picture together outside the Carousel. (So rare for both of us to be in a shot!) 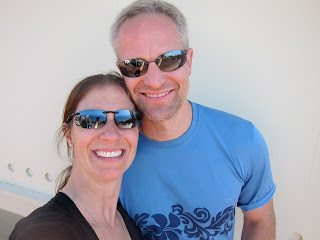 But alas, Sophia rallied for a ride on the oldest carousel in America: 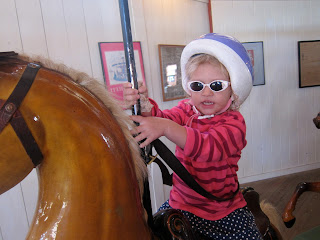 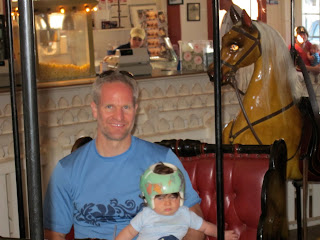 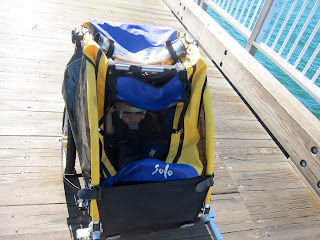 Family fun at the end of the day. What a great trip! 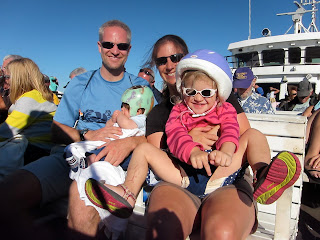 This is just going to be mostly pictures. We did the family fun pumpkin picking adventure today at Drumlin Farms. We've been a few times and love the farm & Animals. Pumpkin picking was an added bonus, alas, they were somewhat pre-picked.

Sophia & Theo still had some good fun though. 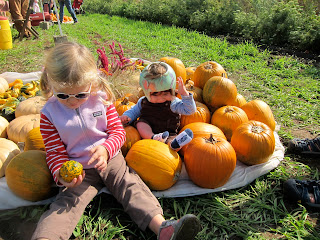 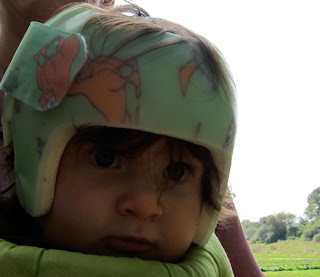 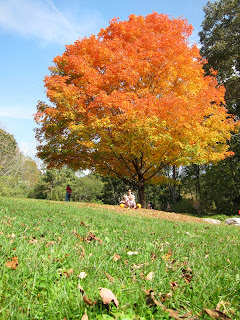 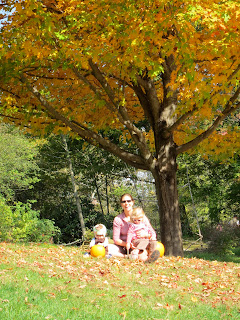 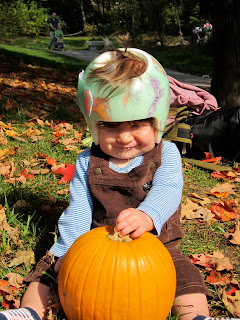 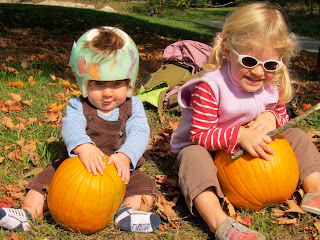 Making a break with them: 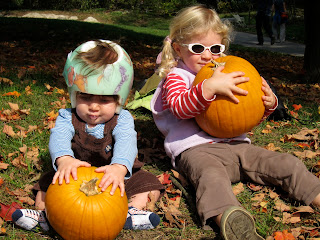